The bees are nearly ready for winter now.

The APIVAR varroa treatment was applied on 22nd August and is a single treatment that last for a minimum of 6 weeks and a maximum of 10.  October 3rd is the earliest date to take the Varroa treatment off the hives.

APIVAR is slow acting so I am not expecting to see a massive, sudden, Varroa drop.. More likely a gradual drop over the 6 weeks or so.

Winter feeding was started on 29th August using Invertbee, a ready mixed syrup.  The bees prefer it to sugar dissolved in water.

After 6 days all the feeders had been emptied so they were refilled yesterday.

The two bucket feeders means that each hive has been given about 14kg (30lbs) of stores.  In another week we will top the feeders up a third time and that should be sufficient winter stores for the colonies.

Beekeeping is not all fun and games in the apiary.  Over the course of the season some hives die out, dirty brood frames have to be replaced and super frames that are no longer suitable for honey need to be renewed.

As a result, I had accumulated nearly 200 frames in the shed waiting to be cleaned.  About 50 of these were CBKA frames.

At some point we have to bite the bullet and set about boiling the frames.

The burco boiler was set up and after 5 hours slog all the dirty frames that had been stored were clean and drying. 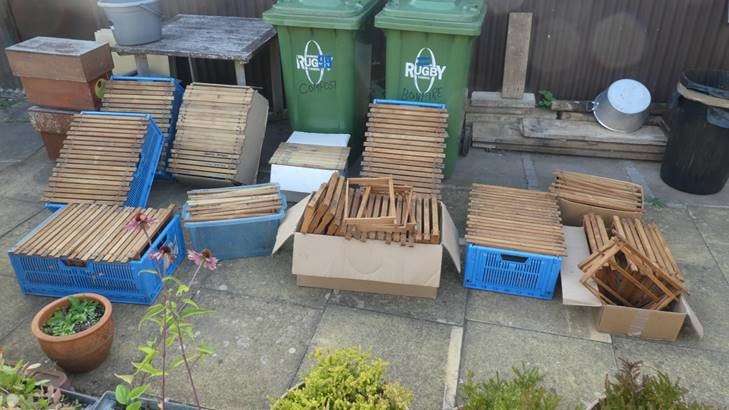 Use the Contact Us form to get in touch and we’ll help you start your beekeeping journey!

Monday 17 January 2022 The government has ignored the advice of its scientific advisors and allowed sugar beet farmers to… [...]

Saturday 15 January  We have a new Area Association in the BBKA voted for at the Annual Delegate Meeting which… [...]